Frogs are incredible. There is so much to learn about frogs that is interesting to children (and adults), like how their young looks completely different from the grown-ups, how they go from living completely underwater to breathing air and how they don't drink water (they absorb water through their skin).

Growing Frogs by Vivian French got my toddler really interested in tadpoles and frogs, their life cycle and their habitats.

To extend this interest and reinforce her learning about frogs, I created these 10+ tactile, hands-on, toddler-friendly activities. This provided an early biology introduction for my toddler to learn about metamorphosis (life cycle of frogs from birth to adulthood) as well as other unique facts about tadpoles and frogs.

My toddler and I made frogs with 'openable' mouths using egg crates, paint, crepe paper and googly eyes, as inspired by Crafting Morning's egg carton frog craft. I drew illustrations of common frog prey and shared about frog's diet as my toddler 'pretend fed' the frogs.

Through this activity, my toddler learnt that frogs are mostly carnivorous (i.e. eat meat), though some species are omnivorous and can supplement their diet with plant matter.

Frogs are known to be efficient at converting what they eat into their body mass.

This is a DIY frog anatomy puzzle to teach my toddler about the different body parts of a frog.

I illustrated an adult frog on cardboard and cut out the different body parts -- head, torso, fore arms and hind legs.

On the back of the puzzle pieces, I wrote the body parts in English and Chinese to encourage bilingual pre-literacy skills.

We also talked about frogs having webbed feet, which assist frogs in swimming due to their large surface area.

I made cardboard cards with illustrations of the different life stages of a frog for visual learning about metamorphosis.

I was mindful about using vocabulary-rich description to describe the appearance of the egg, tadpoles, metamorph and frog so as to help with language development:

We talked about the order of a frog's development and I demonstrated the ordering of the cards. Subsequently, I encouraged my toddler to re-order the cards.

This activity was inspired by the classic nursery rhyme "Five Green and Speckled Frogs". My toddler and I designed the five frogs, taped them to popsicle sticks and I poked five holes in a wrapping paper cardboard tube laid horizontally (representing the log) to fit the sticks. I also taped a blue construction paper beneath the cardboard tube to represent water.

It provided great one-to-one correspondence and counting practice for my toddler as she made the frogs leap into the water one after another as I sang the nursery song.

I also shared that frogs are social creatures which live in groups. Groups of young frogs even swim together in schools, just like fish.

The Growing Frogs book mentions that frog eggs (frog spawn) are laid in water, and when hatched into tadpoles, the tadpoles feed on pond weed and plant matter. To reinforce this knowledge, we crafted a pond scene with lots of frog eggs and pond weed in it.

I provided my toddler with a toilet paper (TP) cardboard roll to do painting stamping. The stamped circles represent the jelly structure of the frog eggs.

Thereafter, I provided dot stickers for my toddler to paste into the middle of each jelly circle. She counted while doing the stickering. Finally, we cut some pond weed from green construction paper to stick around the peripherals of the pond scene when the paint has dried.

Mudpuppy's Tropical Frogs Shaped Memory Match was a great first board game find for my toddler, with attractive exotically colored frogs to match.

I like the field guide included which shares names of the poison dart frogs that inspired the artwork.

It was also interesting to share with my toddler that most poison dart frogs are brightly colored to warn potential predators.

Their bright coloration speaks to their toxicity and levels of alkaloids (chemical defence against predation).

My husband and I played the first match to demonstrate how the game goes for our toddler. When she wanted to be involved, I teamed up with my toddler against my husband and guided her on "taking turns". My toddler managed to remember and pair two pairs of frogs for her first try! I like how this game builds concentration, focus and memory skills.

This sink play activity was inspired by the Growing Frogs story, which features a little girl collecting frog spawn from a neighboring pond, growing them into tadpoles before returning them to the pond as young frogs.

For this setup, I illustrated the life cycle of a frog on cardboard pieces which I propped to stand as the backdrop on the bathroom counter. The pond is the sink, in which I placed expired chia seed. Soaked chia seeds have a layer of jelly-like structure around its black seeds, which highly resembles frog spawn. During the play conversation, I talked about how frogs can only survive in freshwater habitats and common places where they can be found are ponds, lakes, streams, rivers or creeks. Frogs are indicators of the quality of their environment. 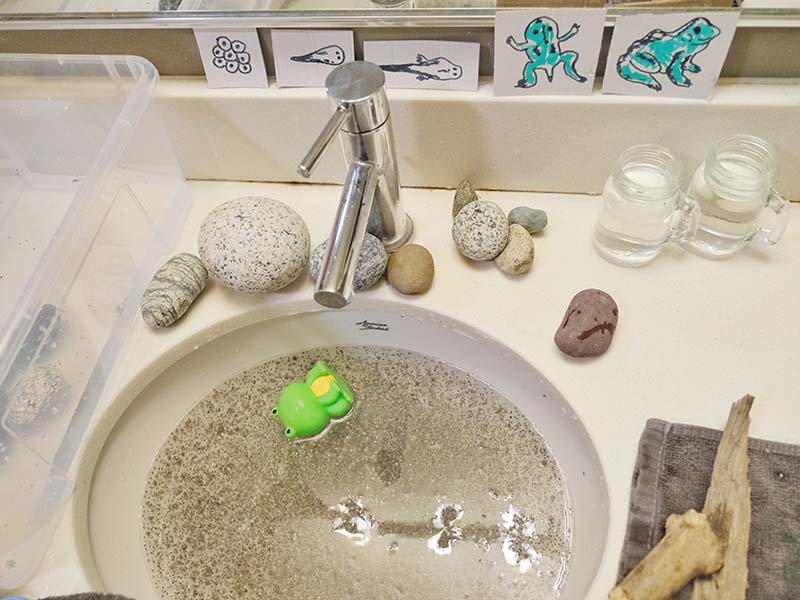 My toddler used a Munchkin frog bath toy as the character for this small world play. Safari Ltd has a life cycle of a frog set with realistic animal figurines which would be more Montessori-aligned for this setup.

This craft activity is to reinforce the knowledge that while tadpoles need to breathe air just like humans, they use gills instead of lungs.

I cut out tadpoles from black construction paper and invited my toddler to stick on their googly eyes and gills. The gills are made from smaller rectangular strips of paper. My toddler also drew waves to stick onto the pond scene to show that the tadpoles live underwater.

These paper gills fray up and resemble "feathery" texture of the external gills which tadpoles have when they are first hatched.

During the play conversation, I talked about how the tadpole eventually loses its gills for breathing in water and then gains lungs for breathing air.

This craft activity is to reinforce the knowledge that while frogs respire through their moist skin, they breathe using their lungs when they are active and require more oxygen.

The Growing Frogs book mentioned how frogs hop onto rocks so that they could breathe through their lungs. Therefore I invited my toddler to draw rocks for the frogs to get up to to practise breathing and living out of the water.

Frog's lungs are a pair of thin-walled sacs connected to the mouth and share similarities to human lungs. For simplicity, I cut pairs of lungs from red construction paper that resemble human lungs.

10. Learning the Chinese Characters for Frog

I was inspired by Happy Tot Shelf's idea of using masking tape to trace letters for alphabet learning.

For this activity, I wrote the Chinese characters for frog, 青蛙 (Qīngwā), in a block font leaving the interior blank for tape. My toddler enjoyed the fine motor work of cutting the masking tape into small strips and sticking them to trace the outline of 青蛙.

I hope that your toddler enjoys these hands-on frog themed activities!

Note: I'm not an expert on frogs, all facts shared above are based on my research and book readings. I strive to provide facts which are accurate, please reach out if any information requires fine-tuning for greater accuracy.