From Resisting to Loving Chinese - My Toddler’s Learning Journey

A year ago, I wouldn't have imagined this to be the case. I am extremely proud of how far we have come on this Chinese learning journey.

From Resisting to Loving Chinese - My Toddler’s Learning Journey

From birth, I spoke to my daughter mostly in English, using Chinese occasionally when we video called grandparents or sang nursery songs. At 22 months, it was evident that English was becoming my toddler's dominant language. She understood most English communication, had a strong English vocabulary with 3/4-syllable words, and had started forming full sentences in English. Every now and then, she injected a few Chinese words like 妈妈 and 奶奶 (mama’s milk) into her sentences and I thought she seemed bilingual enough.

But I realised I needed to prioritise Chinese learning more.

The realisation came when a visiting family friend addressed my toddler by her Chinese name and she didn’t respond to it, and she gave quizzical looks or switched off when my friend further tried to engage her in Chinese.

I made up my mind to put in intentional work to teach her Chinese. Her understanding of conversational Chinese could be worked on, and I needed to help build her Chinese vocabulary so she felt confident in the language, and could gradually find the words to respond (be it verbally or non-verbally).

The responsibility of teaching Chinese was largely on me since I was her primary carer, and I was her only source of Chinese (the husband spoke English to her).

I threw myself into doing research on raising bilingual children and helping children pick up mother tongues/minority languages. Chalk Academy was my treasure find, her techniques and sharing guided me most on my subsequent Chinese teaching journey.

Beginning Our Journey of Learning Chinese

I realised that there were limited opportunities for my toddler to come into contact with Chinese (apart from my verbal communication with her). Since she enjoys being read to, a good way to increase her exposure to Chinese would be through books.

Originally, the ratio was 4:1 for English to Chinese books at home. I decided to dramatically increase our Chinese book quantity to match that of our English books (it was difficult to source good Chinese books in the US, but that's another story/post). By ensuring that we had equal books in both languages, there was now significantly more opportunity for my toddler to pick up a Chinese book.

I also applied Chalk Academy’s technique of creating a print-rich environment in our home. I made handwritten Chinese labels for the different play spaces in the house, high-touch toys etc. My toddler would curiously point to them, and I would read out the characters and explain what they mean. 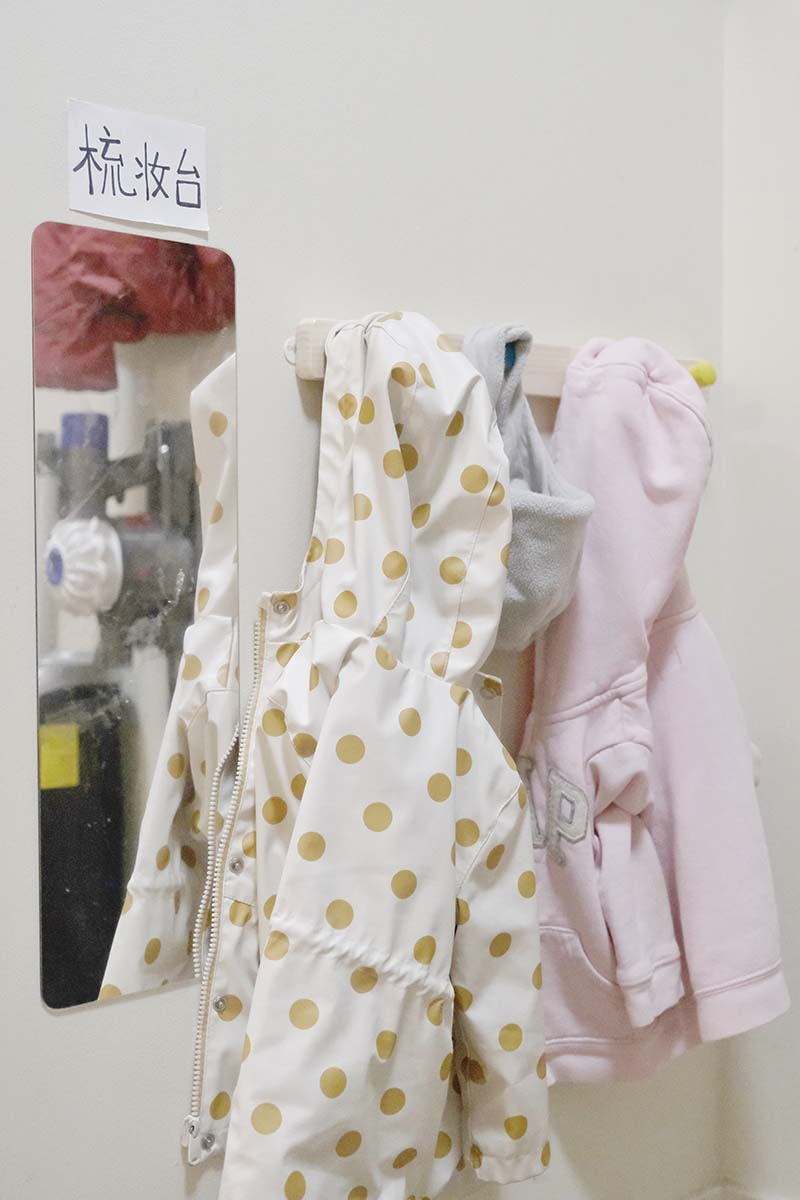 Like Betty of Chalk Academy and as recommended by Simone Davies, author of The Montessori Toddler, I used the OPOL approach in our home, whereby each parent consistently speaks only one of the two languages to the bilingual child.

I took on the Chinese speaking role, and my husband English.

When my communication entirely switched to Chinese, Miss 2 ignored me whenever I spoke in Chinese. She would parrot my husband and eagerly respond to him in English, and this preference was understandable because English was a language she had gained proficiency in and was now highly familiar with.

While I was happy that her English language development was thriving and father and daughter were bonding over a shared language, I was missing out on interacting and communicating with my toddler.

It was painful, but I reminded myself that the reluctance to use Chinese wasn't so much that she didn't want to (the toddler inclination to resist things), but that she couldn't. Research shows that OPOL takes consistent application to work, so we kept at it for a full year (which has now paid off.)

- Building a Strong Vocabulary By Naming Everything in Sight

When we first started OPOL and she responded in English all the time, I would transcribe her sentences. This was my way of modeling how the same communication could be made in Chinese and expanding her vocabulary.

Toddler: I want to go out.
Me: 你说你想出门去。去哪里呢？
Toddler: See ducks.
Me：你说你想看鸭子。好，我们出门去看鸭子。(Repetition helps to reinforce the Chinese phrases of 出门 and 看鸭子.)

I would do running Chinese commentaries as I busy myself and she follows behind.

For instance I would say, “妈妈打开冰箱拿出胡萝卜，妈妈要用胡萝卜做午饭。” (Mama is opening the fridge to take out a carrot, Mama is using the carrot to make lunch.)

I also made sure to point as I named items which helped my toddler identify and remember the things I was referring to visually.

Note: it is tiring to keep up a monologue, but it is effective. Children’s minds are highly absorbent, and they’re taking in knowledge all the time with every piece of communication you share.

It might also feel unnatural, especially if the Chinese words don’t come easily to you. At the beginning, speaking in full Chinese sentences was challenging (I can’t count myself as a native speaker because my primary language is English. Though I had 10 years of formal Chinese education, I hadn’t used Chinese to communicate for more than a decade) but it gets easier with practice.

For the first few months of OPOL, my toddler did not feel confident or comfortable to respond verbally in Chinese. So I needed a non-verbal method to assess her Chinese understanding.

I-Spy is a favourite Montessori game and it was useful for helping me assess which Chinese vocabulary words she knew and did not.

For instance my toddler would be playing with barn animal figurines and I would say, “哦，我看见了一只绵羊，它在哪里?” (Oh, I see a sheep, where is it?”) My toddler would likely point it out or even pass the sheep figurine to me, which helped me assess if she understood my Chinese communication.

It took many months of playing I-Spy before she could and was willing to verbally name items or reply to my questions in Chinese.

To pique interest in Chinese and subsequently nurture the growing interest, these were what we did:

I referenced What to Cook Today frequently to try out Chinese recipes like chives pancake.

Chinese language exposure is natural and rich during the process of referencing the recipes and making these food creations.

What was great was sharing with her the origin of Chinese characters through 甲骨文, earliest known form of Chinese writing, seeing how pictures evolved into 甲骨文 and then to modern Chinese characters. For me, it was beautiful to learn about Chinese civilization, history and language evolution before our time.

After a few months of the above steps, my toddler started to inject more Chinese phrases in her daily communication,. Gradually, she code-switched between Chinese and English*, to finally using Chinese in full Chinese sentences.

*Code-switching is viewed by some language experts as a sign of language deficiency. I align however with the opposite view that code-switching is used by bilingual children to enhance the essence of their communication (some meanings are put across more delicately/strongly with choiceful words in a different language), and maximises communication instead.

All this way, I continuously modeled conversations in full Chinese sentences. I would make sure to recast** errors in ways that doesn't directly correct, which might affect self-esteem since the slightest correction could discourage early efforts at acquiring a new skill.

**Recasting is a technique used in language teaching to correct learners' errors in a way that does not obstruct language. To recast an error, repeat the error back to the learner in a corrected form.

Toddler: 我喜欢吃这个黄瓜。(I love eating this cucumber)
It turns out that it's not a cucumber, but zucchini.
Me: 哦，你喜欢吃西葫芦。西葫芦不柔软嫩吗？(Oh you love eating zucchini. isn't zucchini soft and tender?)

Repeating the right term helps to reinforce learning of this new language term, 西葫芦 (zucchini). In addition, I would add details to help her differentiate the zucchini, so she could tell it apart from cucumber the next time.

There was also times when I couldn’t differentiate if what my toddler said was English or Chinese as her pronunciation wasn’t clear enough. Instead of asking her to repeat (which might invite frustration), I would paraphrase my question to elicit a new answer.

Finally, I maintained that all Chinese communication should be child-led. Family elders have the habit of pressing her for answers in Chinese over phone calls, but I would step in to offer a different option to my toddler to respond if she's unwilling to vocalise a response.

Grandparents: 我是谁？(Who are we?)
Toddler does not wish to reply and looks away
Grandparents: 你不知道我是谁吗? (Don't you know who we are?)
Me: 当你准备好时，您可以回复 。你想向祖父母先挥手吗? (When you're ready, you can reply. Would you like to wave at your grandparents first?)

What I Learnt on this Journey

The Chinese language is so profound, complex and rich. There are even differentiating nuances to take note for different nationalities and cultures!

Even for adults, learning Chinese can be a continuous learning journey. For some, lifelong. So take your time to seed interest from an early age, build your children's foundation, water with patience and consistency, and watch them grow at their own pace!

Wishing you a joyful Chinese learning journey with your little one!